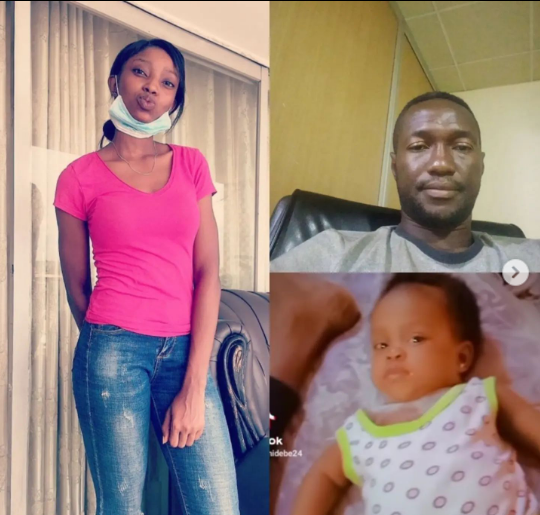 A mother of one has taken to Instagram to express her outrage after her 4-month-old daughter was kidnapped by the child’s father, who first rejected the pregnancy.

Chidebe told us that she gave birth to baby Chidera just four months ago, after carrying the pregnancy without the assistance of the father, Ifeanyichukwu Christopher Obiora, who had previously disputed the pregnancy.

However, she claimed that once the baby was born, the father appeared and professed to want to take responsibility for the child, but it was all a plot to kidnap the child.

According to Ogechi, to prevent a struggle from her, Christopher gave her a drink and she dozed off immediately after. When she woke up, her baby was gone and so was the child’s father.

Efforts to reach him have been unsuccessful as he has switched off his line.

Sharing her story with us, Ogechi explained that she met Obiora in 2021 when she was travelling from Lagos to Onitsha.

They exchanged contacts and began speaking before he mentioned that he wanted to marry her.

Ogechi, an orphan, informed her uncle and Ifeanyi later came alone to see Ogechi’s uncle. However, he was told that he has to come with his people.

In September 2021, Ogechi discovered she was pregnant and told Ifeanyi, but he denied being responsible and he stopped picking her calls.

She returned to Lagos and stayed with her sister in Satelite Town.

When she gave birth, Ifeanyi came back into her life and revealed he was ready to meet her people to begin the marriage rites.

See also  On Tuesday, November 22, 2022, Justice O.A. Okunuga of the Lagos State High Court sitting in Ikeja convicted and sentenced one Tope Peter Obi to one year in jail for possession of fake documents.

Ogechi said Ifeanyi visited her uncle with some people he claimed were his relatives, but his parents were not present.

In the middle of October 2022, Ogechi said Ifeanyi asked to take their 4-month-old daughter out for a father-daughter moment but she refused and told him her daughter wasn’t going anywhere without her.

She said Ifeanyi then told her to make her hair first so they went into a salon. She said while there, Ifeanyi bought her a drink and she became dizzy after consuming it. When she woke up, Ifeanyi and her daughter were nowhere to be found.

Nigeria completes preparations to start mass producing helicopters.August 15, 2022, 1:48 pm
Strangely, Nigerian couples wife gave birth to white triplets babies in the United kingdomSeptember 1, 2022, 11:30 am
The police in Lagos state have arrested Esther Paul, pictured above, for reportedly stabbing her boy...November 20, 2022, 12:34 pm
Ramon Abbas, aka Hushpuppi, a convicted socialite, is set to be sentenced in a matter of weeks.September 9, 2022, 4:39 pm
Given Chilufya has been given a three year prison sentence for an attempt to cut her husband manhoodAugust 27, 2022, 9:14 pm
Post Views: 41
Share this:
News Tags:#kidnap