Muhammadu Sanusi, the former emir of Kano, has guaranteed that the Arabic writing on the naira notes won’t be eliminated from the new currency.

Sanusi said that the Governor of the Central Bank of Nigeria, Godwin Emefiele, gave him the assurance that the Arabic lettering will remain on the newly designed notes.

CBN’s announcement was met with mixed emotions since some Islamic scholars claimed that the redesign of the naira was an attempt to erase the Islamic inscription.

Amid suspicion by Islamic scholars, some Nigerians urged the apex bank to remove the inscription from the redesigned naira.

“There has been speculation going round about the change of some naira notes. I heard various scholars commenting, with some implying that the Ajami on the naira notes would be removed.

“Since the issue came up, we have spoken to some people in the Central Bank, and they confirmed to me that such a plan is non-existent.

“When the misconception became widespread, I spoke to the CBN governor himself, and he also confirmed to me that there is no plan whatsoever to remove the Ajami.

“So, I want to appeal to Islamic scholars to please stop acting on unsubstantiated reports,” .

Apple, Google Asked to Offer Improved Compliance Plans on App Store Law by South Korean RegulatorFebruary 3, 2022, 4:58 pm
Bandits sought N10 million in ransom for the release of the dead body of late Obadiah Ibrahim, a vic...November 14, 2022, 1:22 am
Strangely, Nigerian couples wife gave birth to white triplets babies in the United kingdomSeptember 1, 2022, 11:30 am
Man arrested after a random lady he brought home passed out during sexual intercourseSeptember 15, 2022, 3:19 pm
Elizabeth II, Queen of England, dies at the age of 96 after a health crisis.September 8, 2022, 6:55 pm
Post Views: 40
Share this:
See also  Tosin Idowu, a Nigerian hairstylist, is now trending on social media as a result of his recent wedding to his German partner. 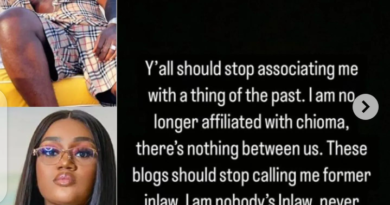 I no longer have any connection to Chioma. Stop equating myself with the past, Chioma’s purported ex-boyfriend King Carter writes.

Dunsin Oyekan, a gospel singer, has survived from a horrific car accident.