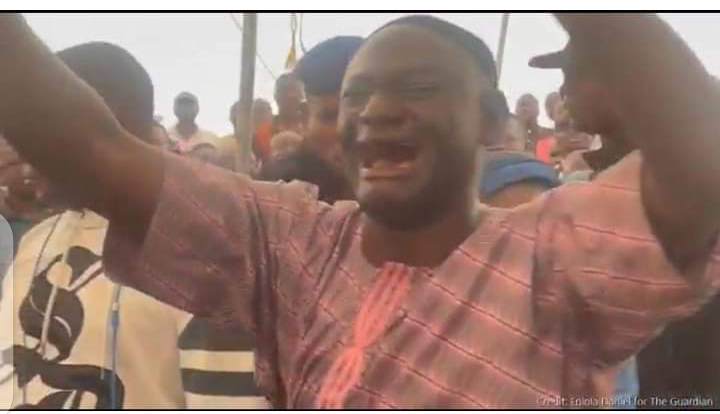 In a viral video, a man was seen sobbing as the bid reached N300,000 and pleading with the buyers to stop. He was trying to buy the car.

On Thursday, Fatteh Hamid documents the public sale of abandoned and forfeited vehicles in Lagos State.

On Thursday, the Lagos State Government held an auction at the Task Force Yard in Ikeja for abandoned and forfeited vehicles. Drivers whose cars were impounded for breaking traffic laws were among those who attended the open sale.

Different dramas from bidders and businessmen who attended solely for business filled the event.

Our observer reported that some people made deals with the highest bidders, who purchased their vehicles and made payments right away.

Osinachi Ndukwe, a driver, and his mother Dorothy Dike sobbed as Ndukwe’s car was auctioned off. The couple who believed they could reclaim the

The duo who thought they would be able to reclaim the vehicle with N50, 000 offer had their expectations dashed when a bidder offered over N430, 000 during the public sale.

Ndukwe, noted that he had yet to balance the payment of the vehicle from whom he bought it. He said, “I got the vehicle on hire purchase for N1.8m and up till now, I have yet to pay the remaining amount.

“Sincerely, it has been a series of trouble for me in recent times. After I drove against traffic and the vehicle was impounded, I was sentenced to three years imprisonment which I just completed two weeks ago. During my jail term, I lost my three-year-old daughter due to unavailability of funds to cater for her while I was in prison.”

Ndukwe stated that his only means of survival was the vehicle and getting it auctioned for that amount destabilised him.

Filled with emotions, he said, “We barely eat daily. My mother hawks traditional herbs and that’s where she has been catering for the family. I don’t have a father. He is dead and there’s really no hope and I don’t see help coming from any angle. We are all by ourselves.

“How do I get N450, 000 to pay in the next 48 hours, starting tomorrow? It’s almost impossible to do. The irony of everything is that I still have debt on the vehicle from the hire purchase I got it and they have also been on my neck to ensure payment. I can only appeal to Nigerians come to my aid. My family needs help.”

The Lagos law on vehicle auction

Auctioning forfeited and abandoned vehicles by the state government is not new and reports dating back to 2019 showed that the state has been tenacious in prosecuting traffic offenders to restore sanity to Lagos roads and unhindered movement of law- abiding motorists.

On Tuesday and Wednesday, December 3 and 4, 2019, the government auctioned 108 abandoned and forfeited vehicles after the expiration of the 30-day public notice. Similarly, on November 23, 2020, 44 seized vehicles were also auctioned by the government for violating traffic laws.

Also, on January 19 and February 9, 2021, the state auctioned 88 and 83 vehicles respectively for violating traffic laws.

An unidentified vehicle owner who refused to speak with the press almost fainted when a bidder offered more than the N150, 000 he budgeted for his impounded vehicle.

The man and his wife shunned our correspondent’s request for an interview after their expectation of recovering their vehicle crumbled like a pack of cards.

The wife, however, noted that the husband was hypertensive, adding that talking about the situation would worsen the matter.

She said, “Please, let us be. We are not in the right state of mind. He is hypertensive and I won’t want him to collapse due to the different thoughts running in his head. The bus has been secured by someone else and that is our only means of survival.”

Before the public sale commenced, the venue almost became rowdy as some bidders attempted to disrupt the process on the claim that the vehicles they inspected earlier were not available at the auction ground.

A pensioner, Yusuf Abdulkadri, noted that the auction was fraught with irregularities.  He said, “This process lacks merit. We were asked to buy a form and come for the auction after inspection only for the vehicles we inspected to vanish into thin air. Why were the vehicles removed? If due diligence was to be followed, they should have removed the vehicles before we came for inspection. If it was only a vehicle, it would have been different but they are more than one.’’

Abdulkadri noted that the action was fraudulent and should be investigated. He said, “Why must it be at the eleventh hour that such an announcement would be made when we at the venue to bid for them. The government telling us that it would refund the money we paid for registration does not translate to anything solid. It shows lack of integrity in the procedure.  “Why should they remove the vehicles we have registered for? Why can’t they remove the vehicles before we make any commitment and we would then proceed to another vehicle.’’

He stated that it was abnormal and the process had to be looked into considering the attached terms and conditions.

See also  Young Nigerian man dies hours later in a car accident "I have no plan B. Is Do or Die "Says on his Facebook timeline

He said, “If they have other agenda, they should at least display the vehicles for fair bidding and the highest bidders will go home with the vehicles.’’

A businessman, Enoch Gabriel, also faulted the auction process, urging the government to look into the irregularities in the process.

He said, “From time immemorial, we know that even the government sends their agents to such auctions. However, this case of completely removing a vehicle that had already been inspected is faulty and must be addressed. When we paid, registered, inspected vehicles, they were in good condition and were inside the yard. We got here today (Thursday), we realised that the vehicles were missing when the auction was to start. This only tells one thing that some powers have cheated us.”

Gabriel explained that it took a lot to get the money he wanted to use to bid for his preferred vehicle because he took a loan, stating that the vehicle’s disappearance was a tough one for him.

He said, “The loan I took has interest and I have planned to use it to work to repay the interest. Now, I don’t have a way to secure the car and I still have to pay for the loan. It is not a fair.’’

Position of the law

In his view on the issue, a lawyer, Ishaq Apalando, noted that many times people think a major instrument of crimes such as a gun has to be present for a crime to be committed, stating that it’s not limited to that.

He said, “Everyone in Nigeria truly has the right to property; either movable or immovable. However, those rights have certain limitations that the constitution has rightly spelt out. For example, if you have to forfeit a property because of a court order, be it a magistrate, high court or court of appeal, it is actually valid. What is important is for a specific law to state that these are the crimes and the attendant punishment. If these are met, then such laws are valid. Lagos State has a law to this effect and I believe the government is right about it.’’

Ishaq explained that the law was final except the suspect decided to challenge it by approaching a court of law.

He said, “When a vehicle is impounded, the owner can challenge the decision by appealing and if the person was able to prove him or herself, then the court will release their property to them. However, your property can be forfeited as the consequence of a crime in as much as there is a court order or rather a contractual agreement.”

“Many of the activities of the auction cannot be blamed on the government because they have the sole right to even cancel an auction. However, in cases where we have negligence, it’s a different thing. We have both contracts and negligence. For Negligence, it means that someone has a duty of care and if such duty is breached and it leads to harm for another person, a suit can be then filed.”

He noted that for contracts, there were offer, acceptance and considerations, saying that as far as an auction was concerned, it was not a definite offer.

He said, “In this case, in the registration form that was issued by the government, it was stated there that they have the right to withdraw any vehicle from the auction. To compel the government to go through with the auction of the vehicles they removed might be a bit difficult because in the form that they signed, there is a caveat, and the caveat is the big issue protecting the government.’’

The lawyer further said that the aggrieved bidders might get a refund as the best option for them due to the caveat in the signed form.

The Chairman, Lagos State Task Force, Shola Jejeloye, who was at the public sale noted that many of the vehicles were abandoned by their owners for the fear of the unknown.

He said, “Many drivers abandoned their vehicles out of fear and they later appeared at auctions to bid for the same vehicles. What many of them do not realise is that the court they are running from can even give them their vehicles without having to pay any money.

“If an owner gets a lawyer and is able to prove to the court that the decision to ply the road against the traffic was right, the court can make a decision and the person goes unpunished. Many times when they come to me, I advise them to go to the court.’’

Jejeloye noted that attending auctions to retrieve their vehicles was a disadvantage for the owners. He stated, “Imagine coming here today to bid for your vehicles when you could have faced the court and if you were found guilty, you will be fined for N10,000 or sometimes as low as N5,000 depending on how you are able to argue your case.

“However, you are here today and some of you will get the vehicles back for as high as N500,000, or even higher when you could have got it back for fines that are way lower than that. We need to be familiar with the laws to be able to leverage them.’’