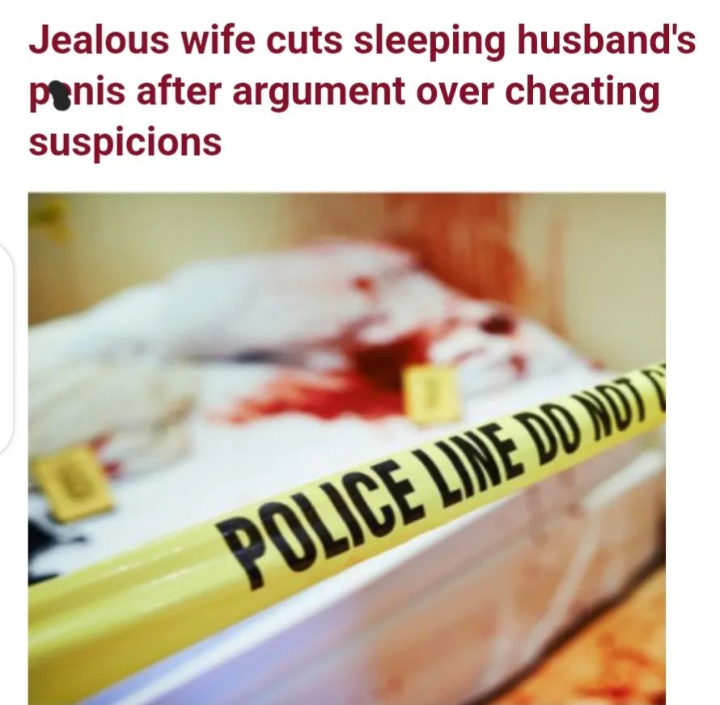 Earlier this month, a woman tried to sever her husband’s penis while he was sleeping; she was given a three-year prison sentence.

According to testimony given in court, Jimmy Ngulube of Kapiri Mposhi, Zambia, woke up at midnight on August 4 with a severe groin discomfort.

He observed his wife Given Chilufya threatening to slay him with a bloodied knife.

Before going to bed, Chilufya, 37, accused her husband of infidelity, which sparked a heated argument. Then, when she awoke during the night, she made the decision to exact retribution.

Jimmy, 43, contacted his brother, who then drove him to the hospital, where the worst of the damage could be repaired.

Additionally, the neighborhood police were informed, and Chilufya was arrested.

On August 26, Chilufya was given a three-year prison term for intentionally hurting her husband by Kapiri Mposhi Resident Magistrate Arnold Kasongamulilo.

Despite Chilufya’s pleas for mercy, the magistrate insisted that she had attacked and injured her husband with the clear aim to kill him.

"You're Ungrateful and Can Never Make It" Singer Portable seen assaulting his artist Manny MonieNovember 19, 2022, 5:51 pm
President Muhammadu Buhari has stated that Nigeria is among four of the 54 African countries that pr...November 24, 2022, 3:19 am
How to start a BlogJanuary 28, 2022, 6:40 am
Ifeanyi Adeleke, the three-year-old son of Music Star Davido and his fiancee, Chioma Rowland, has di...November 1, 2022, 2:39 am
James Brown and Bobrisky clashed at a party , Bobrisky showed displeasure seeing James Brown dancing...November 22, 2022, 1:05 pm
Post Views: 45
Share this:
See also  Pete Davidson is apparently dating Emily Ratajkowski After his divorce from Kim Kardashian
News, TOP STORIES, Uncategorized, World News Tags:#attemptedmurder